Where Does Endometriosis Occur

Typically, endometriosis occurs in the pelvis. The female pelvis is a space continuous with the abdominal cavity. It contains the bladder, the rectum and other bowel, and, most importantly, the female reproductive organs, including the vagina, uterus, tubes and ovaries.

Endometriosis can occur at almost any site in the pelvis. The diagram below shows the most likely sites. Endometriosis is most commonly found to be sitting on the peritoneum of the pelvis behind the vagina and uterus, underneath the ovaries and sometimes on the ovaries.

It can also occur on the peritoneum in front of the uterus, between the uterus and the bladder. It less commonly grows on the fallopian tubes and, therefore, disrupts their function. More severe forms of endometriosis can grow inside the ovary, rather than just on the ovarian surface.

This sort of endometriosis often forms cysts, which we think may grow in from the pelvic wall, which slowly take over a lot of the ovarian substance. As these cysts have a small period every month, they soon fill with a thick, menstrual-type blood, which, as the water is absorbed out of it, starts to look like melted chocolate. This is how the “chocolate cysts”, which are part of the more severe forms of endometriosis, occur.

Fortunately, they do not occur in the majority of patients as they are quite damaging to both the ovarian structure and its function. Rarely, endometriosis occurs in body sites away from the pelvis. It can occur in other parts of the abdominal cavity, such as on the surface of the liver, and has rarely been found in such places as abdominal wounds, or even in lung tissue.

Figure 1. The site at which endometriosis occurs is important in explaining its side effects. 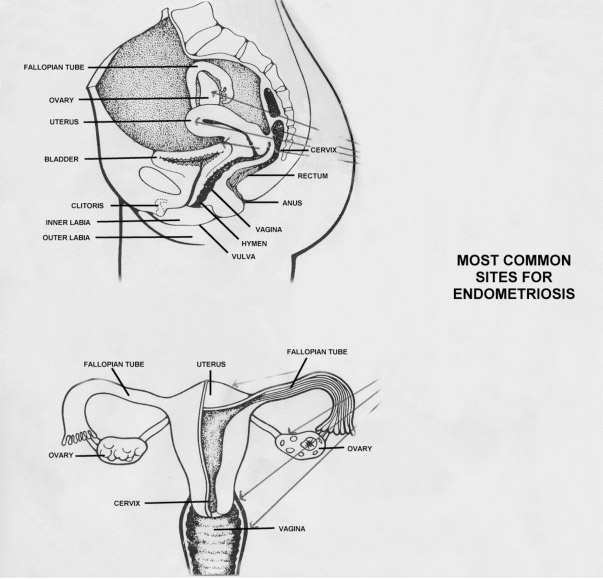 Side effects of endometriosis

Nodules or plaques of endometriosis that occur behind the vagina and behind the cervix on the womb are commonly associated with pelvic pain and, particularly, deep pain on intercourse.

Endometriosis is classically associated with period pain because it releases a small amount of thick, menstrual-type blood, rich in various chemicals which cause period pain. The major problem is that this blood, instead of flowing out of the vagina as nature intended, and is caught inside the abdominal cavity. Due to the thickness of the blood and its chemical nature, it can cause quite intense period pain, particularly in ladies who in the past have never been particularly troubled by this problem.

Impact of endometriosis on fertility

As endometriosis becomes more severe, the inflammation it causes by growth and its release of blood can cause adhesions to form. These are bands of scar tissue that form between two surfaces within the body.

In the pelvis, the uterus, tubes and ovaries, whilst connected to each other anatomically, are supposed to be able to move reasonably freely. This means that the tubes can move over the ovaries to pick up an egg in order to enhance the chances of pregnancy.

Endometriosis can cause quite extensive scarring in the pelvis, immobilising the movement of the uterus and thus can cause pain on intercourse and pelvic examination. Similarly, these adhesions can tether the ovaries down to the pelvic wall, which can cause pain and sub-fertility. The fallopian tubes can sometimes be caught in these adhesions, which can limit their mobility across the surface of the ovary and prevent them from being in the right spot on the ovary each month to catch the egg as it is released.

The bowel that is normally sitting down in the pelvis can also get caught up in these adhesions and it can cover the uterus, tubes and ovaries. This can make the pelvis very difficult to see at laparoscopy, as well as causing significant pain by the disruption of the normal pelvic anatomy. It can also contribute significantly to infertility.